It’s easy to take maps for granted. Most smartphone users have tried Google Maps at least once or twice. Scan this list of six other maps available from your phone’s browser. Have you ever used one of these?

Just for kicks, scan Wikipedia articles about MapQuest and Google Maps. These are the two most prominent online maps available to consumers at the moment.

You’ll notice that MapQuest’s origins date to 1967. This was long before the  world wide web (www) started in 1991.  MapQuest was not called MapQuest back then. Rather, it started as Cartographic Services, a division of R.R. Donnelley & Sons. Today, MapQuest is owned by Verizon.

Side note: Browse this Wikipedia article about the start of the internet … evolving into the world-wide-web. I bet you didn’t know this!

So … this history is ONLY about maps that help you drive somewhere. You probably know that there are a bunch of other types of maps. You’ve seen weather maps, world maps, and a whole variety of different demographic maps – although you might not have realized it.

Computers have significantly changed the way maps are created, produced, and used. Earth scientists depend heavily on a wide variety of maps. Three important types of earth science maps include: 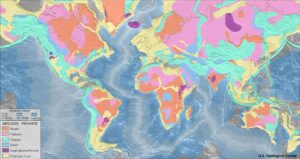 Map image is public domain by USGS and Wikipedia Commons.

Broadly, map analysis is  a study is made regarding map types (which could include geologic maps, isopach maps, contour lines etc.), and the unique physical qualities of a map such as scale, title, and legend. It is also a ways of decoding the message and symbols of map and placing it within its proper context. A map is an image of an area, usually of the Earth or part of the Earth. A map is different from an aerial photograph because it includes interpretation. The word “map” can also be used to talk about a chart or drawing that shows relationships between ideas, people, events, or anything else you can think about. People who make maps are cartographers. 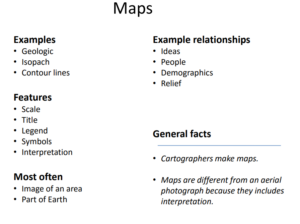 Question? Ask me a question. You can mark it as private or public. I will try to answer the public questions before the next class. Thanks!

3:05 How to orient a map and take a bearing with a compass. The basics of how to use a compass and map.

This hands-on activity introduces concepts, applications, and usage of topographic maps. Materials needed: poster board, scissors, glue or glue sticks, pencil or pen. You were provided printed sheets for this activity. But, if it was lost, you can reprint the Work Packet.

Map making dates back thousands of years. With each new century, improvements have taken place in both the art and the science of maps. Today, most people have reasonably easy access to GPS-type of maps, at the touch of a smart phone or computer. Some might argue that paper-based maps and other non-digital maps are truly a think of the past and are entirely obsolete. Others might argue that significant value still exists in non-digital maps – and there will be an ongoing need, in spite of advancements of computer technology – to maintain both the art and science of traditional map making.