On Wednesday, June 24 … join the Google Meet. Please turn off your microphone. Thank you.

You will see my screen. Make sure you have speakers turned on – or a headset/earbuds.

Mon-Tue Work Packet – This work packet was distributed as a printout. You probably do not need to print this file.

Wed-Thur-Friday – Write an essay. You did not receive this assignment in your work packet material. You will need to launch this file and follow the instructions. (Here’s a helpful resource to assist you in better summarizing your research).

Introduction to our Topic

Okay … we are going to cover a lot of ground on this “Weather” topic. We will absolutely examine weather and how it happens. But, we will ALSO examine the effects of weather. In particular we will examine weather’s contribution to erosion, weathering, and relationship with climate and climate change.

Weather is the atmosphere’s heat, dryness, sunshine, wind, and precipitation at a particular time and location.

Weathering is caused by action of weather on physical objects near Earth’s surface. Physical and chemical changes are made to these objects.  Examples of the objects include rocks, minerals, and human made structures.

Erosion is very similar to weathering. Erosion,though, is about the movement of material from one place to another. While similar, the two concepts are not exactly the same thing.

Weather can cause weathering (physical and chemical changes) as well as erosion (movement of material).

Weather and climate often get confused with each other.

You could sort-of think of the differences in terms of a student.

A student received a 62% on the most recent test. (That is sort-of like weather. The score of a test is a measurement at a specific time).

That same student, nearing graduation is known as an “A student.” This hypothetical student has received A-report cards since entering middle school. (Being an A-student would be similar to climate in this explanation. Being an A-student suggests a pattern of high grades over a long period of time).

Using our student again, this same student was a B-student in grade school. This is kind of like climate change – the student went from a pattern of good grades over the first several years of school to high grades.

Betcha Didn’t Think About This Yet …

Check these files out.

In earth science, erosion is the action of surface processes (such as water flow or wind) that remove soil, rock, or dissolved material from one location on the Earth’s crust, and then transport it to another location. Rivers of the world are a significant factor in erosion. Rivers exert hydraulic action – a force of the river against the banks can cause air to be trapped in cracks and crevices. Rivers also exert abrasion – rocks carried along by the river wear down the river bed and banks. Erosion and weathering are not the same thing. Weathering does not include movement. Weathering is the breaking down of rocks, soil, and minerals as well as wood and artificial materials through contact with the Earth’s atmosphere, water, and biological organisms.

Weather plays a large part in creating the valleys and mountains we enjoy today. Snow, rain, and wind are important factors in forces of erosion. These forces create deeper canyons, new creeks, wider rivers, and filled-in lakes. Erosion plays a part in determining types of vegetation and animals that with thrive in a location. 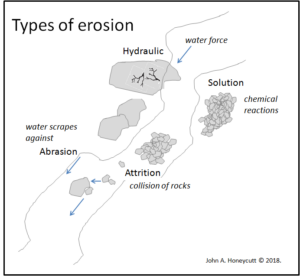 Here are some types of erosion that are directly observable.

Wind is the flow of air on a large scale – and smaller (local) scale also. Wind consists of the bulk movement of air.

Meteorologists describe wind using its strength, speed and direction. Short bursts of wind are often called gusts. Gusts last from a few seconds up to a minute. Stronger winds are called squalls. Squalls last for over a minute. The longest duration winds have a variety of names depending on average strengths. Some of these descriptions are commonly used during news and weather reports. These include breeze, gale, storm, and hurricane.

Several important expressions describe global winds and their effect. Starting from the equator and moving toward the poles, these expressions are: doldrums, trade winds, westerlies, and polar easterlies. Air flowing from the poles does not flow in a straight line. Further, each hemisphere has three “looping” patterns – called convection cells. Something interesting about comparing these convection cells between the two hemispheres – they are somewhat of mirror images to each other. The  six major convection cells result in “prevailing winds.” 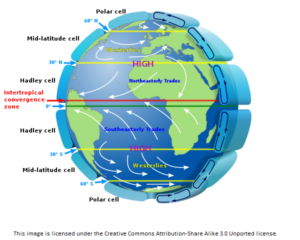 Climate change is a change in the statistical distribution of weather patterns when that change lasts for an extended period of time (i.e., decades to millions of years). Climate change may refer to a change in average weather conditions, or in the time variation of weather within the context of longer-term average conditions. Climate change is caused by factors such as biotic processes, variations in solar radiation received by Earth, plate tectonics, and volcanic eruptions.

There have been at least five major ice ages in the Earth’s history. During such periods of large-scale glaciations (lasting several million years, each), Earth’s surface has been drastically reshaped – even the features of entire continents. 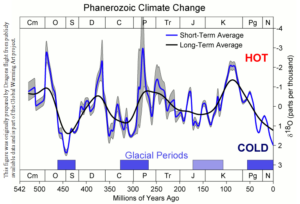 Consider launching one or more of the optional topics below. Launch and explore the student handouts, read the overview, and watch videos.